More than 1000m2 of low maintenance cladding from Swish Building Products has been installed at the home of the Seasiders, Blackpool Football Club.  The cladding has been used to refurbish the club’s canopied walkway and entrance on Bloomfield Road.  Main contractor, Lowline Ceilings developed a system to use the cladding as a suspended ceiling. 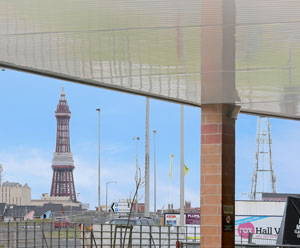 the coastal town and could withstand the blustery seaside weather.  The original aluminium ceiling had deteriorated badly as a result of weathering, corrosion, wind-damage and vandalism.

“We wanted a low maintenance ceiling, one that didn’t need painting,” said Graham Raby, maintenance manager at Blackpool FC.  “PVC-U was the obvious choice; we can simply wash it down every now and again.”  Having supported Graham and the team with refurbishment projects over the last three years, contractor Lowline Ceilings was given the task of developing a solution.

Neil Pankhurst, MD of Lowline Ceilings said: “We have nearly 40 years’ experience as a suspended ceiling contractor but this was a unique one for us.  We’ve used this type of product only once before, for a porch on a modular building but we thought we’d ask the question of our supplier.  Working with our Swish Area Manager, Stuart Davidson and the company’s Technical Manager, Dave Osborne we were able to create a system which met the brief including the client’s request for “no joints.”

After developing a prototype using 150mm wide boards, Lowline Ceilings confirmed the specification.  Swish Building Products manufactured 8.5m long cladding boards, a bespoke length which formed the majority of the order.  7.5m lengths were also used where product had to be fitted around features; in some areas this saw the cladding chevron in and around corners.  Using 150mm widths secured at 400mm centres Lowline Ceilings screwed the cladding onto a metal furring system rather than traditional timber battens.  Under the supervision of Dave Osborne Lowline Ceilings complied with Swish installation guidelines, and was able to pass on a full product guarantee.

Neil continued, “This was very much an unusual installation but we would definitely do it again.  We couldn’t have recommended anything better; it was the best product to use, installed using the best possible method.  We know that we secured the order off the strength of the product.  Working with an established business like Swish, one with a good reputation and a well-presented parent company also helped us seal the deal.  We now have one very happy client.”

The refurbishment has been deemed a vast improvement, one which will withstand the ravages of the club’s coastal location…just 100 yards from the sea, and reduce maintenance costs for Graham and the club’s management team.